CONSPIRACY- Why was rocket launch shown before Putin?

During television coverage of the launch of a Soyuz rocket, the first launch to be carried out from the new site, video of the rocket blasting off from the launchpad was shown BEFORE that of Vladimir Putin watching the event.

The sacrilegious video sequence was even shown on Russian state television. The bosses there were some of the architects of the global rules on always showing Saviour of all the Russias Putin before any other video in any report mentioning him.

Could this have been merely a mistake by editors? Unlikely.

Could editors have deemed the rocket video more compelling viewing than Dear Father of the Nation Putin’s face with its eyes like black market sapphires and its smoothness like a diaper ad? Impossible. 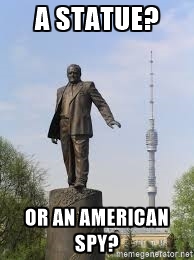 Proof, if proof be needed, that CIA operatives snuck into OUR television control rooms and switched the videos.

RIYF has written to Russia’s Prosecutor General’s office asking that all American citizens in Russia be immediately arrested and interned in securely guarded camps for fifty years as a pre-emptive act of self-defense.

We have asked that the country be put on full military alert and that army divisions be stationed around all strategic Russian television assets both domestically and abroad.

We can safely assume that our request has been taken on board and that rapid deployment brigades are parachuting into Berlin, London and Washington as we speak, to secure RT, Russia 24 and Sputnik offices with orders to eliminate all hostile military and civilian forces in the offending cities, lest they decide to also show some wholly uninteresting event such as breaking news or a speech by some gay leader of theirs before that of Putin’s face.

May Putin’s image remain forever hallowed and forever first – for everyone who doesn’t want a nuclear weapon up their ass. Amen.